It seems astonishingly ironic that a European American man, in attendance at a racial justice political demonstration in support of African American people, would attack, viciously tackle to the ground, and brazenly attempt to rob the photo and video gear of, a female mixed ethnicity African American woman of color photojournalist, in broad daylight, with bystanders all around, and hundreds of Seattle Police officers just blocks away, 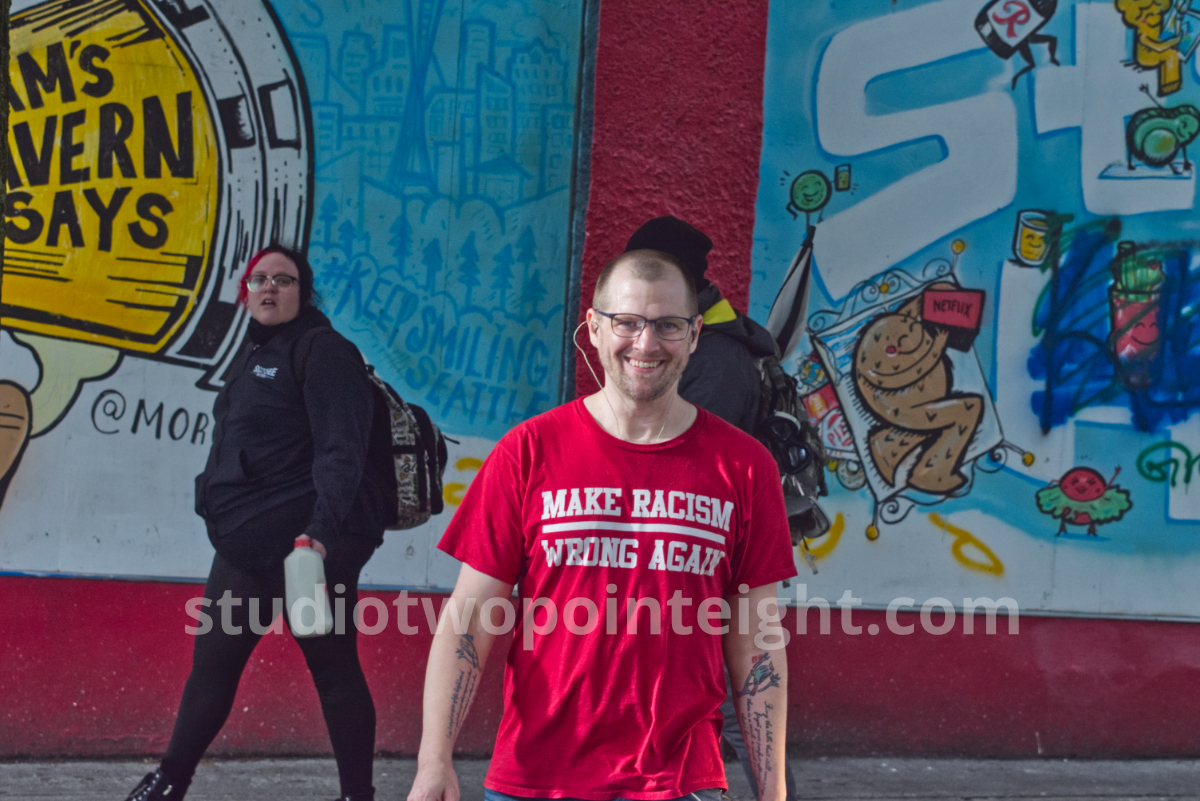 as Bennett was himself just a block or so away from the landmark political demonstration about seeking racial justice for African American people.

One of the more disturbing aspects of the arraignment of John L. Bennett was that during the preamble portion that precedes the published portion of the arraignment that is present here on the Studio 2.8 website, the "limited appearance" defense attorney who represented defendant John Bennett aka John Lindsay Bennet at the arraignment, an attorney named Brooks De Peyster, made a variety of egregiously slanderous, false, accusations about the Studio 2.8 photojournalist who is the victim in the King County Prosecuting Attorney's prosecution of Bennett. This type of grasping attempted character assassination is the sort of tactic that seems generally the desperate ploy of four flushing defense attorneys trying to deal with the problem of a defendant who has been video and audio recorded committing the criminal acts alleged in the charging documents filed with the court by the prosecuting attorney's office. The scurrilously specious, lying, verbal arguments presented the court by attorney de Peyster to judge Karen Donahue did not appear to be at all persuasive, since King County Superior Court judge Karen Donahue ruled against Mr. Peyster and his client, defendant John L. Bennett.

All four (4) Seattle area television channels were present at John Bennett's arraignment hearing: Q13FOX, KING5, KIRO7, and KOMO4; using a single "pool" video camera that is visible in this Studio 2.8 video, and all four Seattle area television channels broadcast stories about John Bennett's arraignment in King County Superior Court during their Monday June 15, 2020 evening television broadcasts. Note that in this video, a jail jumpsuit color orange colored block is used to obscure defendant John Bennett aka John Lindsay Bennett's face throughout this video, in compliance with the court's verbal order in this regard to all media at the arraignment hearing. For Studio 2.8 reader convenience, however, a still photograph, produced with instinctive professionalism by the master Studio 2.8 photojournalist who photographed and recorded first person high definition video of being attacked by John Bennett, is presented here, which provides evidence of John L. Bennett's facial identity, and the ironic shirt that John Bennett wore while committing a racially motivated felony hate crime.