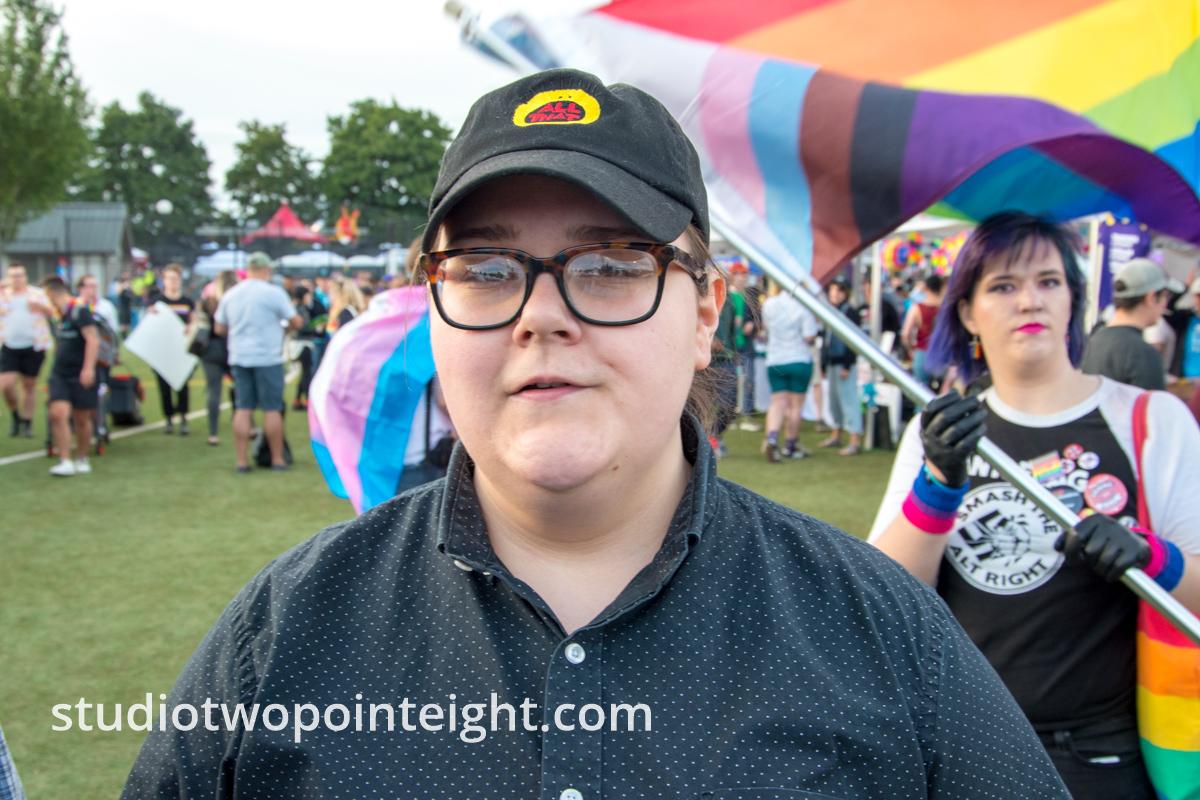 The organizers of the Seattle Trans Pride 2019 march and rally, an organization called "Gender Justice League", whose executive director is Elayne Wylie, described their event on their website with the following statement:

Instead, a vigilante hate mob attacked, menaced, assaulted, and battered, an LGBTQ woman of color professional photographer with hypocritically hateful, quite unlawful, false accusations that the LGBTQ woman of color Studio 2.8 photograph is a "racist", "fascist", "Nazi", "white supremacist", "Patriot Prayer" member, when in fact this photographer was one of the very people the event was supposedly meant to celebrate. The Seattle Trans Pride 2019 vigilante hate mob, dominated by European American, i.e. "white" males, intimidated and menaced a senior citizen LGBTQ woman of color professional photographer with hypocritical hate and bigotry that would and should shock the conscience of any reasonable American.

In this Studio 2.8 photograph, one of the participants in the vigilante hate mob, an apparent staff member, a communist extremist who had been present as a communist counter-protester at previous Seattle political events, crowded directly into the face of the Studio 2.8 photographer who, through years of experience and professionalism, was able to produce this photograph anyway, while being menaced and taunted by the woman in this photograph, with her malicious and hateful accusations including accusations of being a "racist", a "fascist", and a member of a political group called "Patriot Prayer", wherein the false "Patriot Prayer" membership accusation formed the core of their basis for unlawfully discriminating against and ejecting an LGBTQ woman of color, at an event supposedly intended to celebrate "inclusion", "diversity" and "human rights". The organizers and staff of the Seattle Trans Pride 2019 clearly and irrefutably violated the civil and constitutional rights of the LGBTQ woman of color Studio 2.8 photographer who produced this photograph and accompanying video.

It is difficult to imagine a situation more bizarre and ironic than an event such as Seattle Trans Pride 2019, which was advertised as one about "inclusion", "acceptance", and "love", but was instead one at which a group of completely uncivilized and unhinged maniacal people, who were presumably who profess to believe in such values as "inclusion", "acceptance", and "love", but who instead demonstrated and expressed misguided, extreme, hatred, violent, unfounded bigotry, and even felonious malicious harassment, toward an LGBTQ woman of color who had attended the Seattle Trans Pride 2019 event for the sole professional purpose of creating a positive and supportive photographic documentary about it.