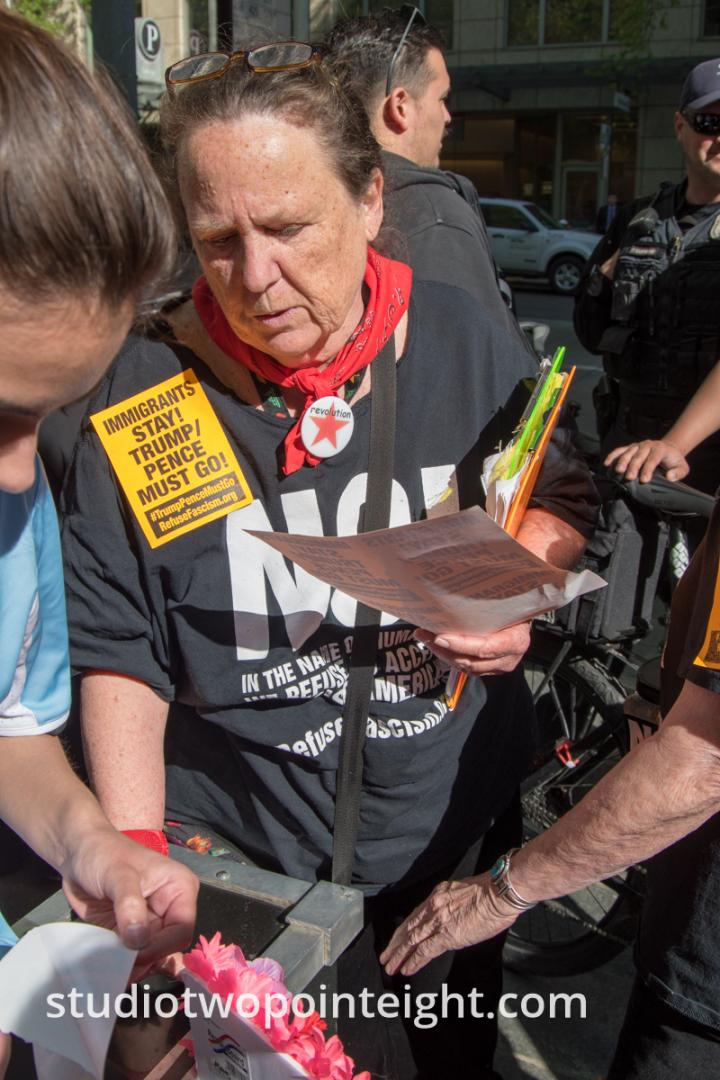 May Day
May 1, 2019
Revolutionary Communist Party 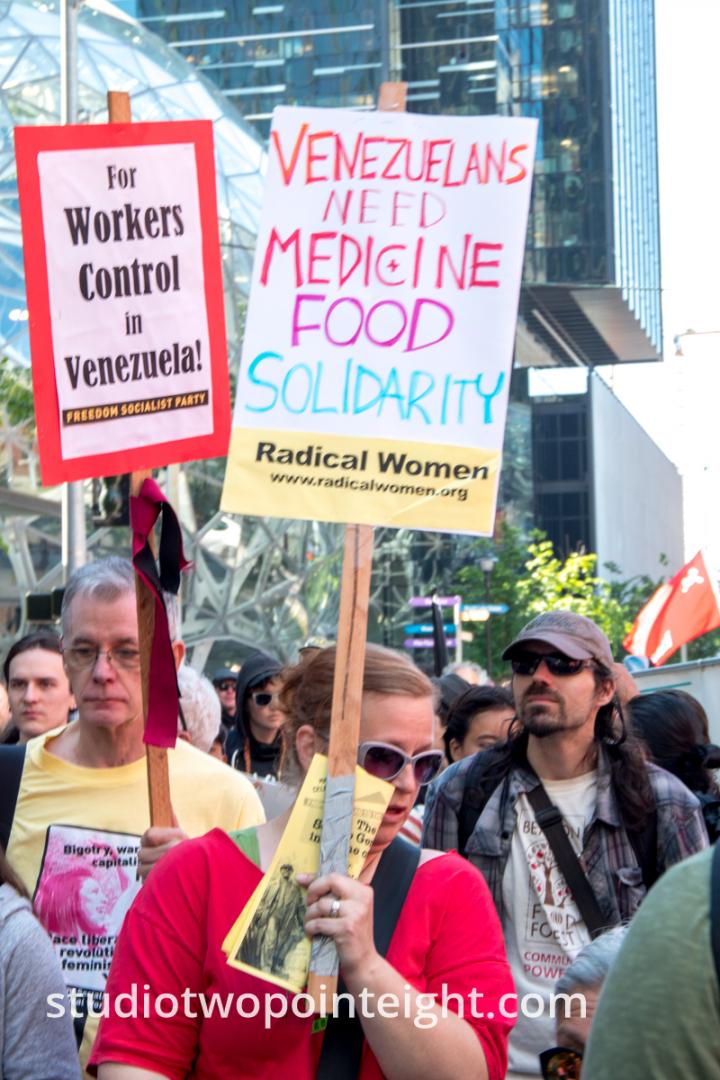 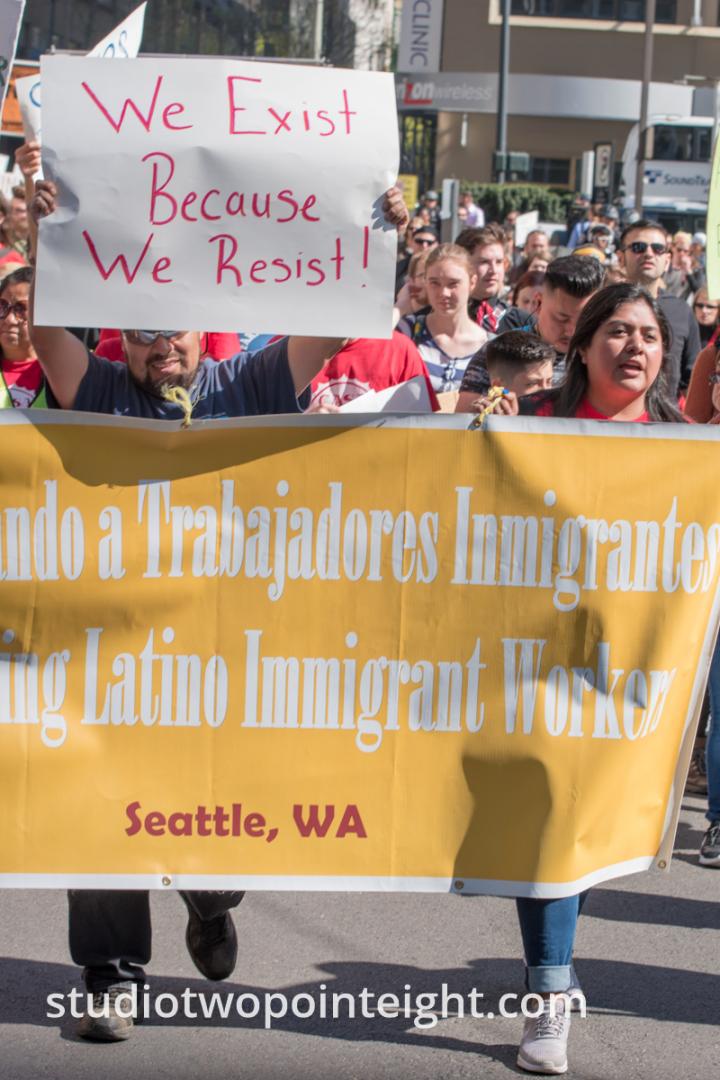 This extensive gallery of tall aspect ration photographs presents a variety of images from the May 1, 2019 U.S. Immigration Policy March and Rally held in Seattle, Washington on that day. This year's incarnation of the annual May Day immigration politics march and rally included a march along Seattle streets from Judkin's Park in south Seattle through parts of Seattle's Capitol Hill neighborhood, and then through parts of Seattle's downtown business core. The March concluded with two different sets of speeches, the first made in front of amazon.com headquarters and the second set of speeches made from a portable stage setup in front of the federal courthouse at 7th Avenue and Stewart Street. The immigration policy march and rally paused in front the amazon.com headquarters on 7th Avenue, where various speakers, including Seattle City Council member Lisa Herbold expressed their perspectives and concerns about the working conditions of employees of companies who contract with amazon.com to provide various types of services to amazon.com, such as security. The march portion of the immigration politics rally was led through the streets by the well known Aztec traditional dancing troop Ceatl Tonalli, whose dancers wear brightly colored traditional Aztec costumes as they conduct formal group dancing to the beat of a drum team. The photographs in this gallery are presented primarily in chronological order. 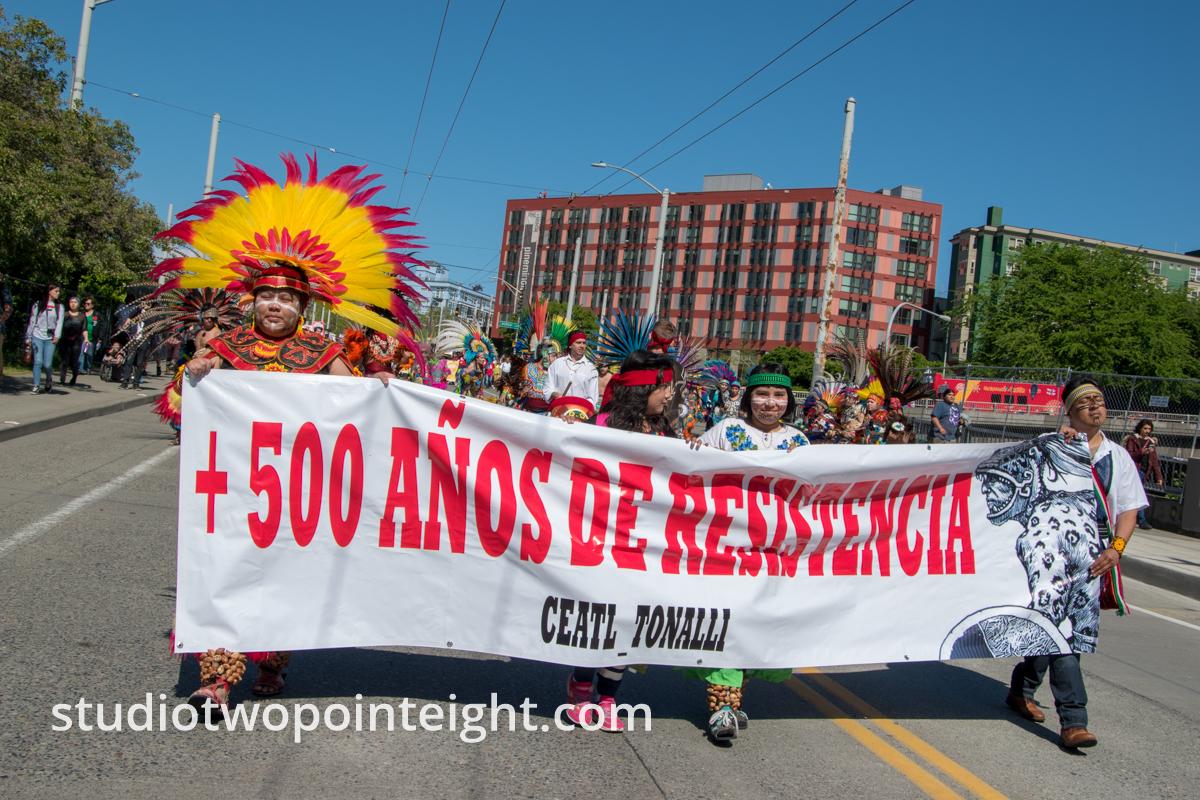 This extensive gallery of photographs presents a variety of images from the May 1, 2019 Immigration Policy March and Rally held in Seattle, Washington on that day. This May Day march and rally included a march in the streets from Judkin's Park in south Seattle through parts of the Capitol Hill neighborhood, and then through parts of downtown Seattle, that ended with speeches made from a portable stage setup in front of the federal courthouse at 7th Avenue and Stewart Street. 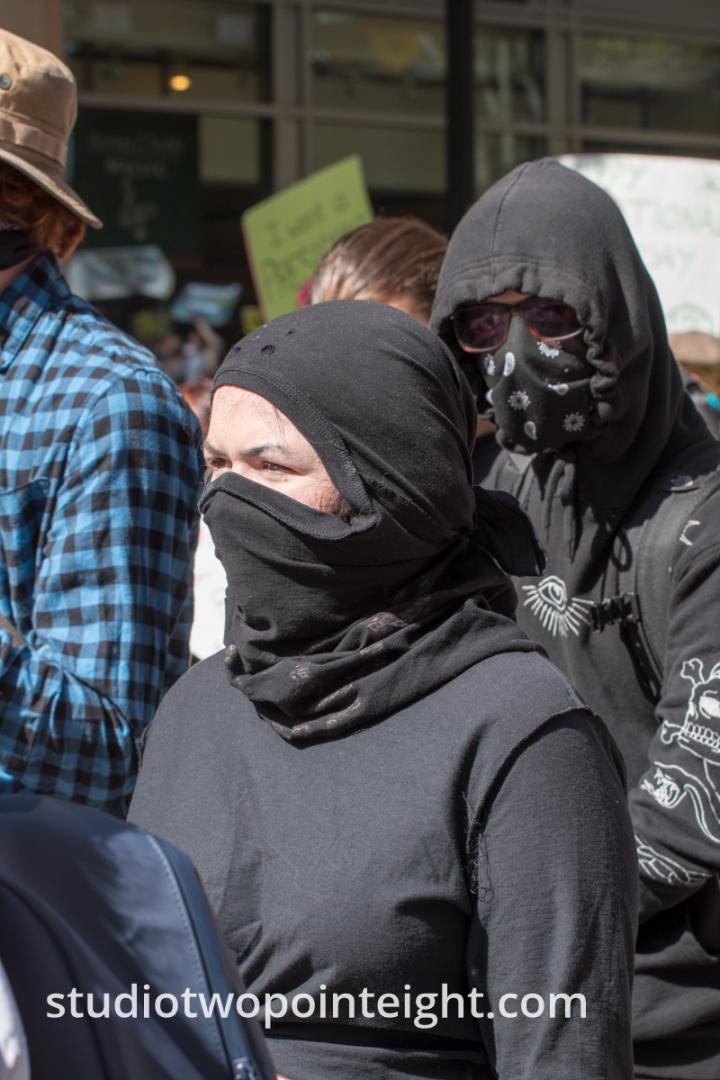 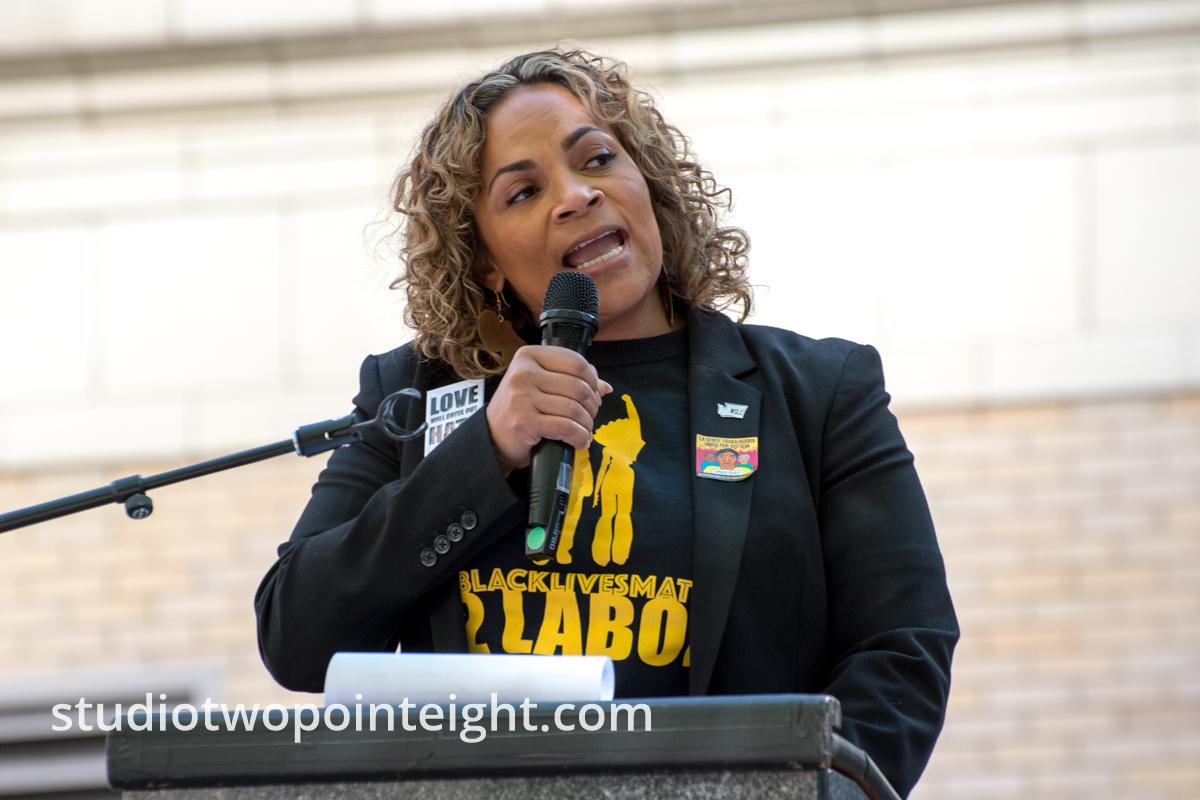 This gallery of photographs from the May 1, 2019 Immigration Policy March and Rally held in Seattle, Washington, presents most, if not all, of the speakers who gave speeches in front of the U.S. Federal District Courthouse that day. This annual May Day march and rally in Seattle includes a march through city streets from Judkin's Park in south Seattle, through parts of the Capitol Hill neighborhood, and then through parts of downtown Seattle, and ended with speeches from a portable stage setup in front of the federal courthouse at 7th Avenue and Stewart Street intersection. 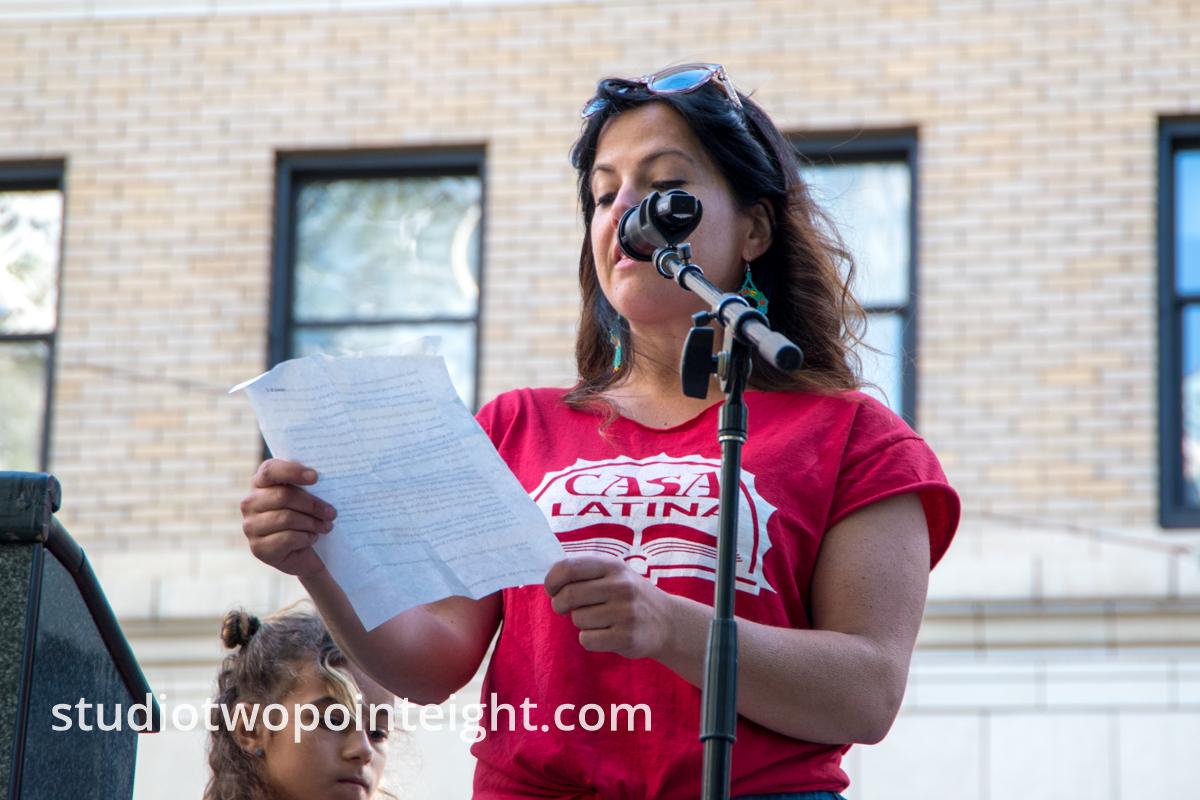 On May 1, 2019, the Studio 2.8 photography team covered the Seattle May Day immigration politics march through the streets of Seattle, including the stop for workers' rights speeches at amazon.com headquarters, and finally for speeches at the U.S. District federal courthouse. The Studio 2.8 photography team has been photographing the Seattle May Day immigration rallies for many years. This year's May Day march and rally in Seattle was organized by multiple political groups, including Casa Latina which provides support services to immigrant domestic services workers, and the SEIU service worker's union.

The 2019 edition of Seattle's annual May Day immigration politics and workers' rights march and rally began at Judkin's Park in south Seattle. Attendees at the 2019 Seattle May Day Immigration march walked north from Judkin's Park through parts of Seattle's First Hill and Capitol Hill neighborhoods. At the head of the march was the well known Ceatl Tonalli Aztec dancers who performed their traditional dances along the way, with stopos for dance performances at each major street intersection. 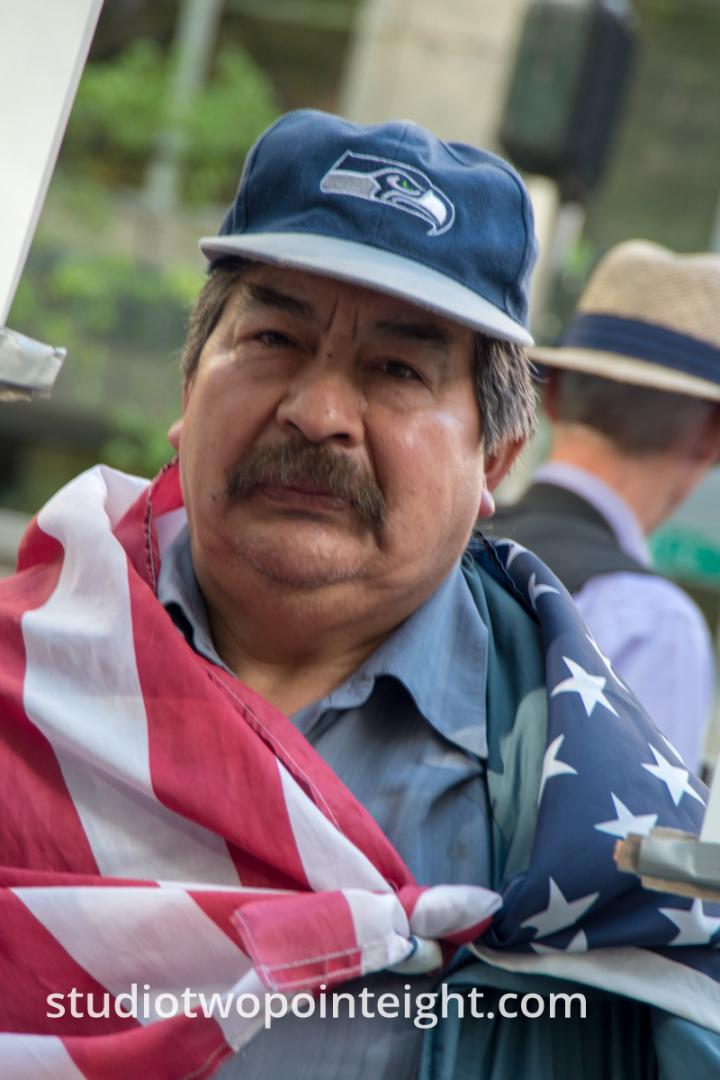 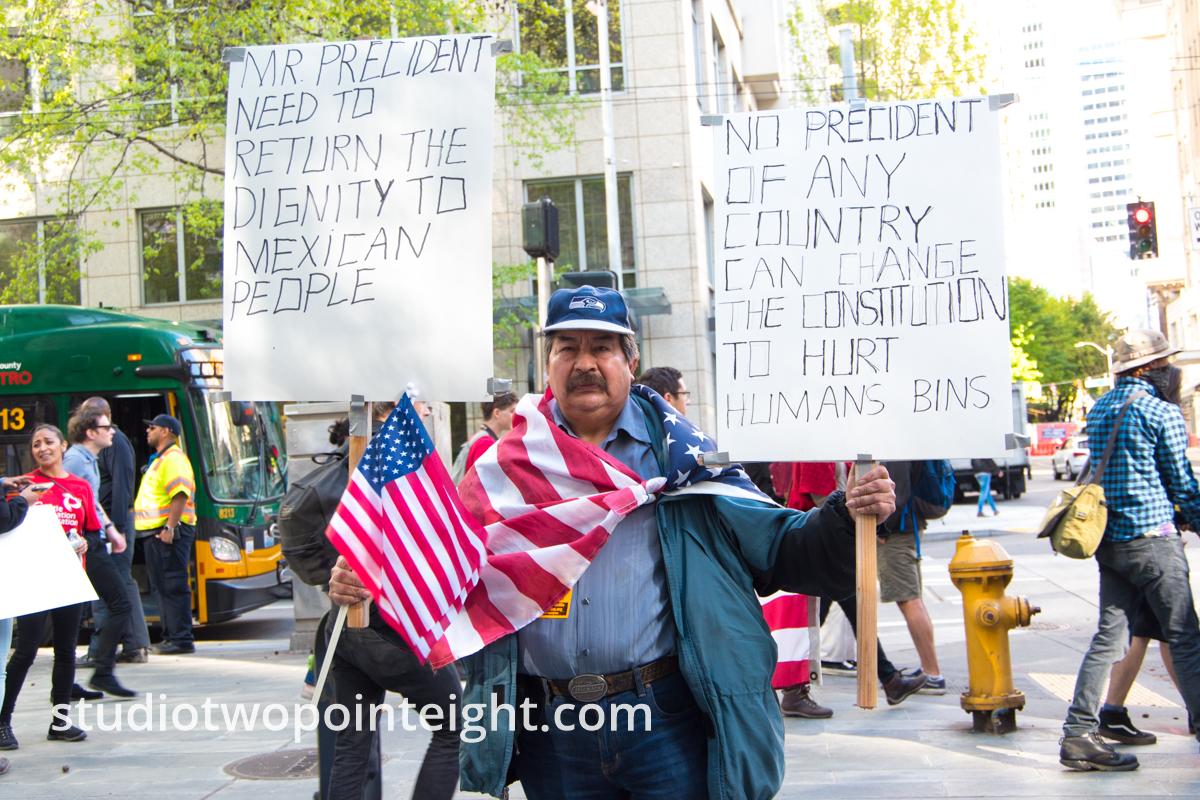 In this photograph taken on May 1, 2019 at the May Day Immigration politics march and rally, a man who wore an American Stars and Stripes flag like a shawl displayed posters with political slogans on them. The political slogans on the man's posters were, "Mr. President Need to Return the Dignity to Mexican People" and "No President of any County can Change the Constitution to hurt humans bins"(sic). 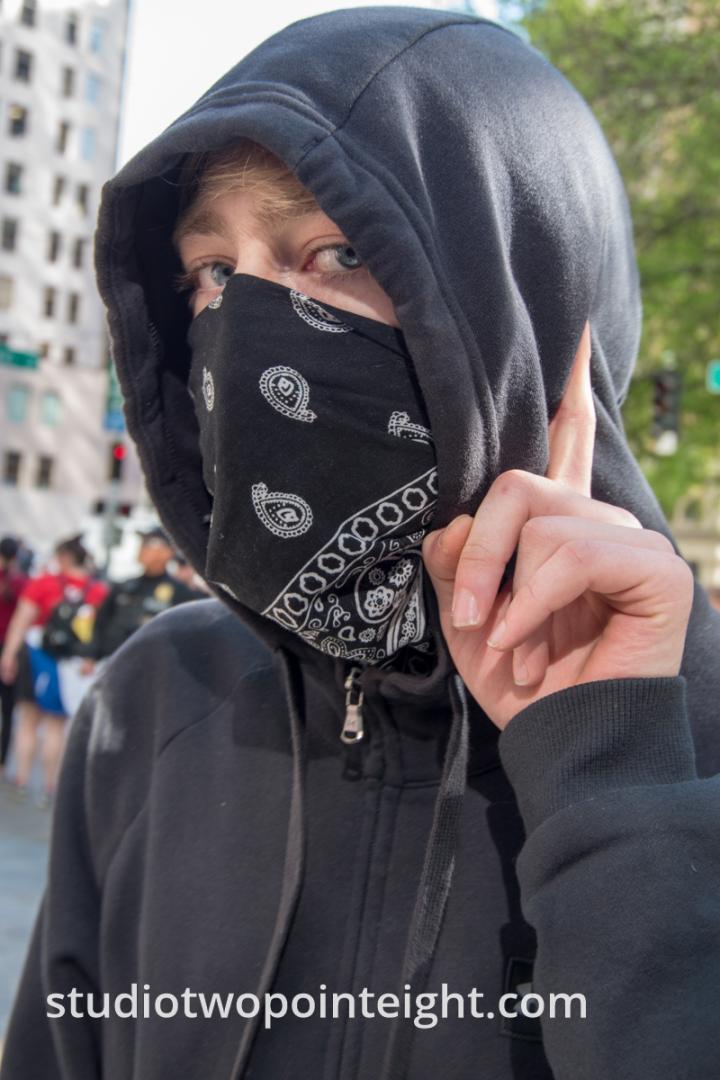 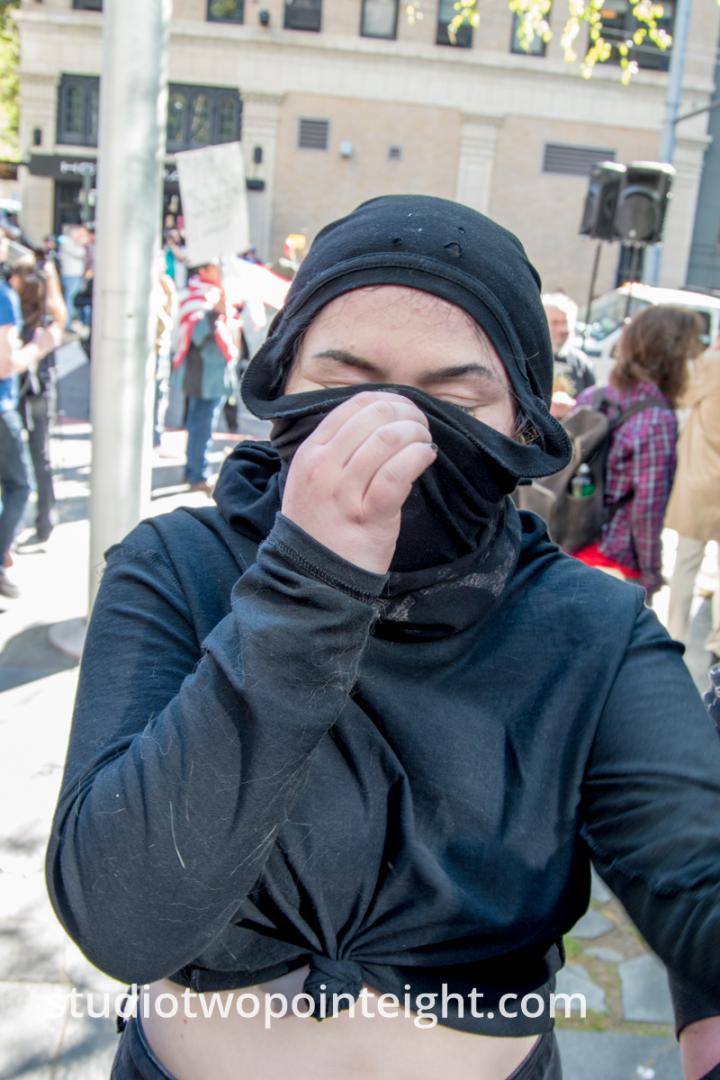 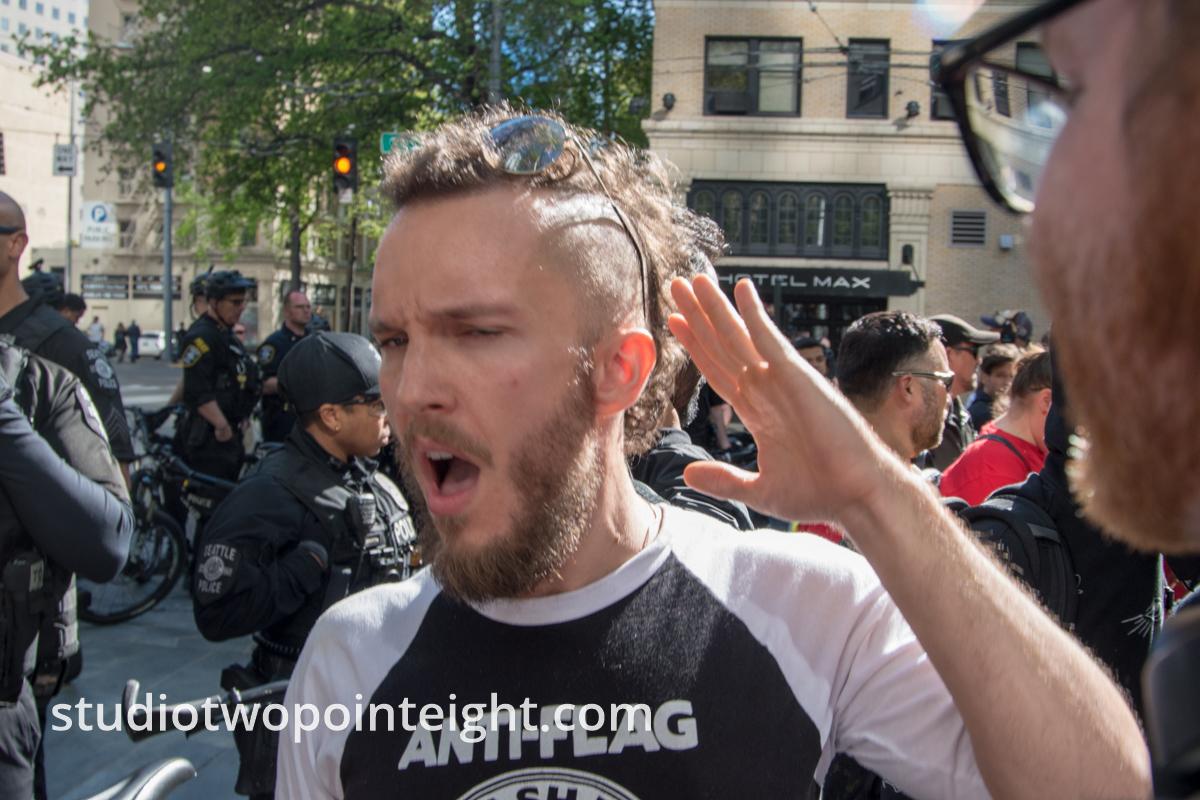 While Studio 2.8 photography was working to gather the extensive and detailed photographic record of the Mary 1, 2019 May Day Immigration Politics rally in Seattle, that is otherwise presented on this website, the goofball in this photo series decided that the rally was all about him, that he just had to be the center of attention. Consequently, here he is, an idiotic malignant narcissist who wore a shirt that bore the slogan "ANTI-FLAG - SMASH THE ALT-RIGHT" and a logo symbol of a fist smashing a Nazi swastika. 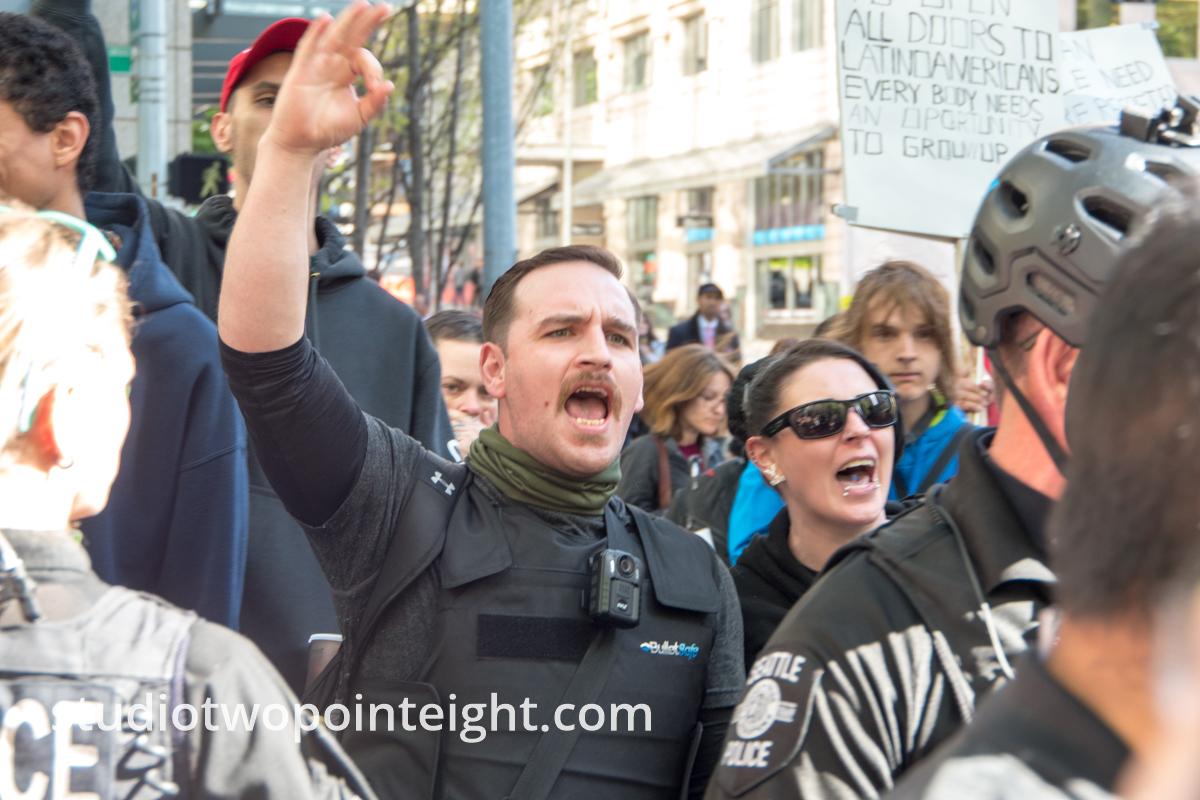 At the Seattle May Day 2019 Immigration Politics march and rally there seems to have been only one commotion. While speakers were giving speeches from a portable stage setup on 7th Avenue adjacent to the federal courthouse, suddenly a commotion erupted along the Stewart Street sidewalk. Most of the people at the rally appeared to have "left" leaning political views, as indicated by the banners, posters, stickers, and so on. Suddenly a group of people that included at least one man who wore a red "Make America Great Again" hat appeared on the Stewart Street sidewalk and began shouting. 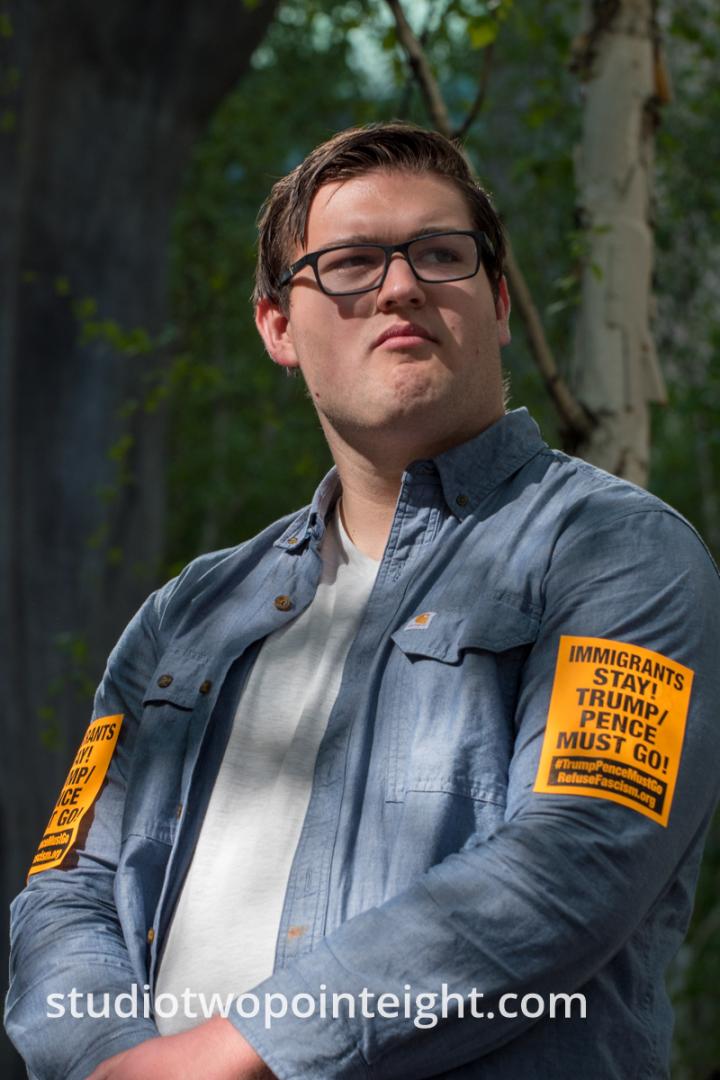 Revolutionary Communist Party
May Day
May 1, 2019 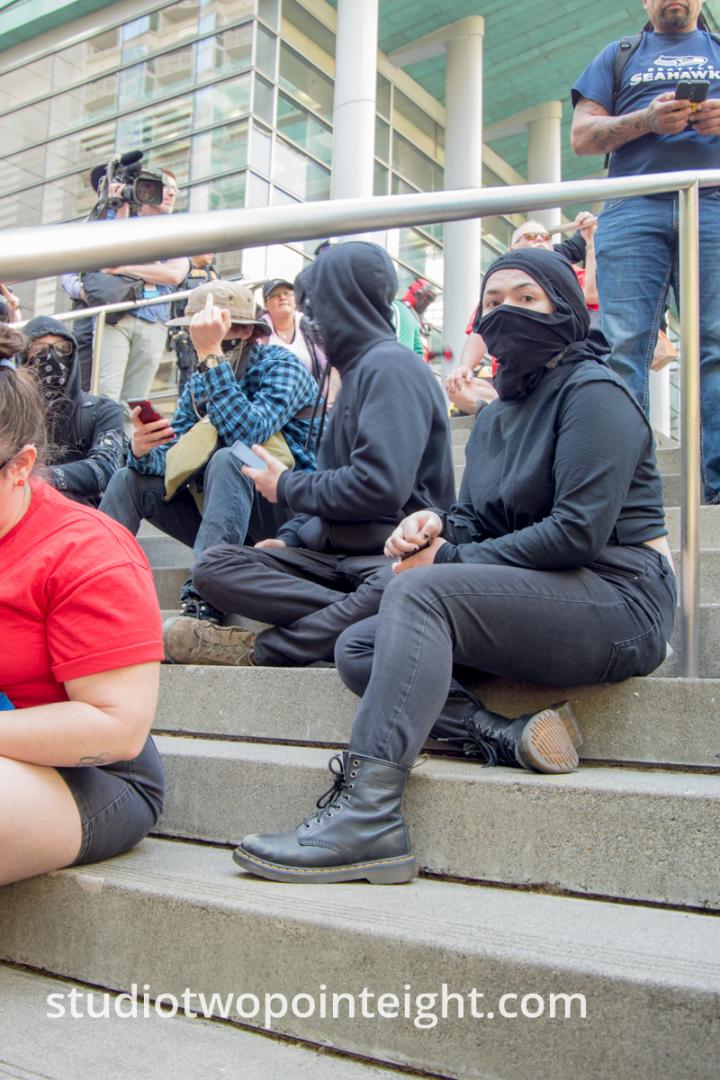 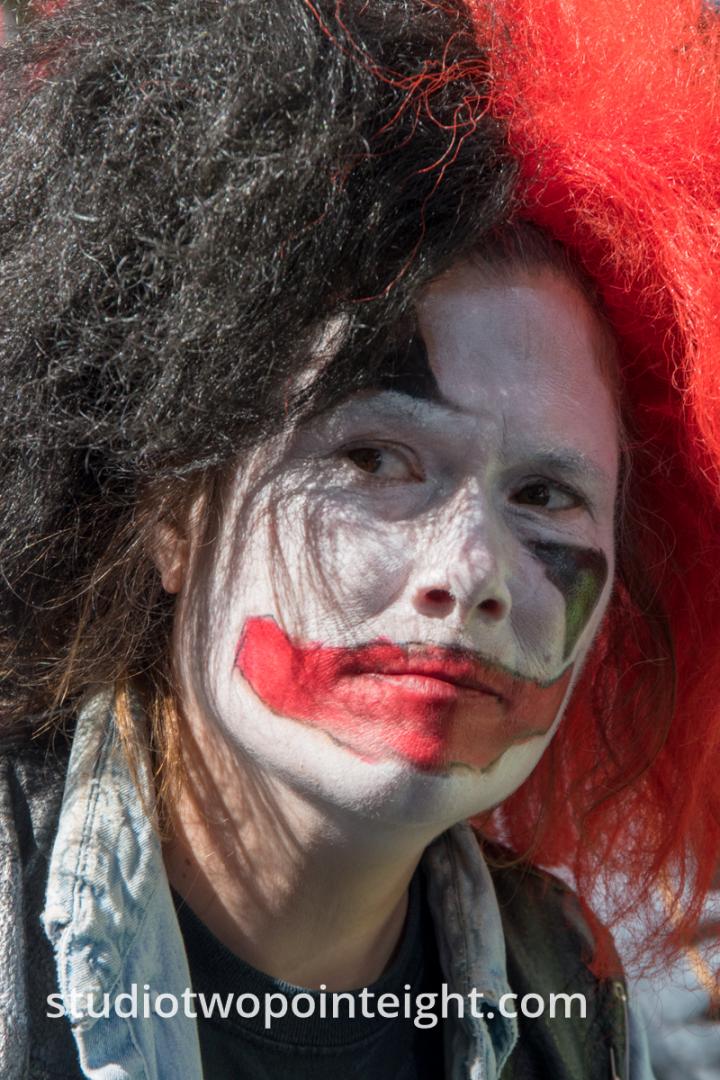 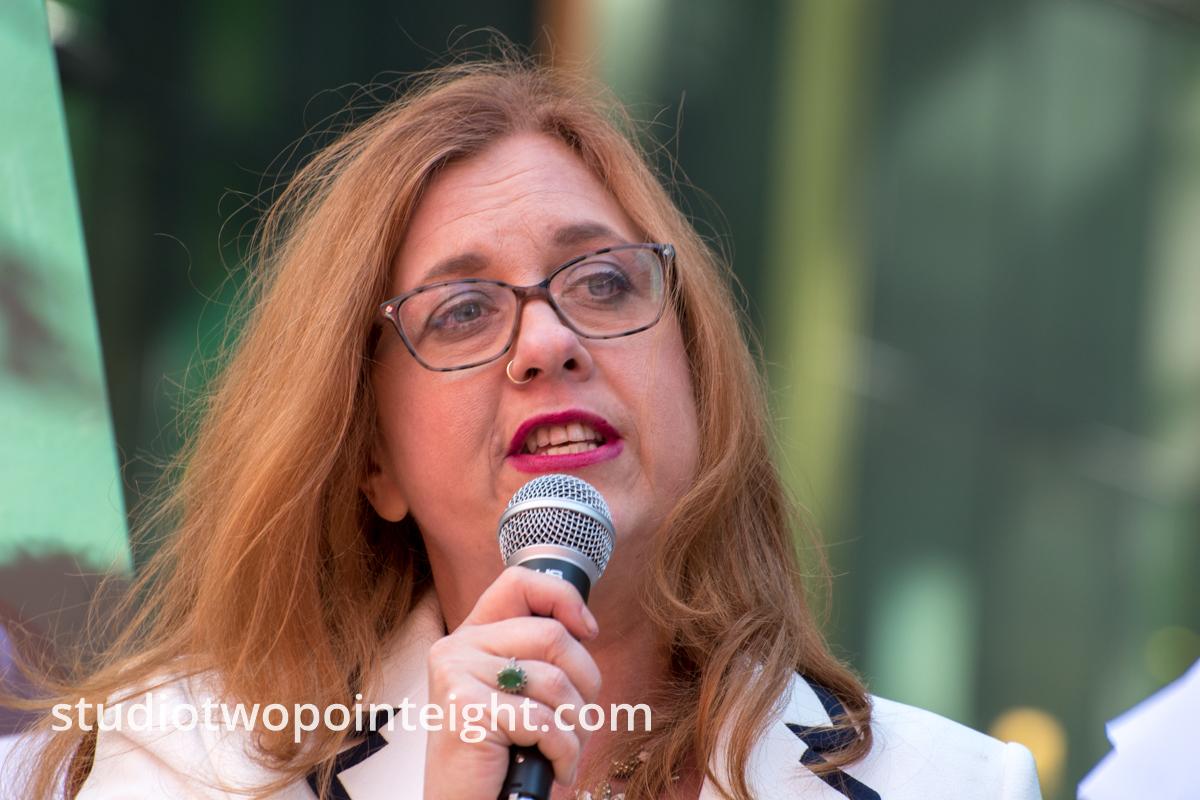 In these photographs taken on May 1, 2019, in Seattle, during the May Day march and rally through the downtown Seattle streets, Seattle City Council Member Lisa Herbold spoke outside Amazon headquarters about workers' rights and worker rights problems that she and other speakers said are occurring at amazon.com. The worker protest against amazon.com, was held in front of amazon.com headquarters by members and supporters of the "Service Employees International Union" (SEIU) employee union. 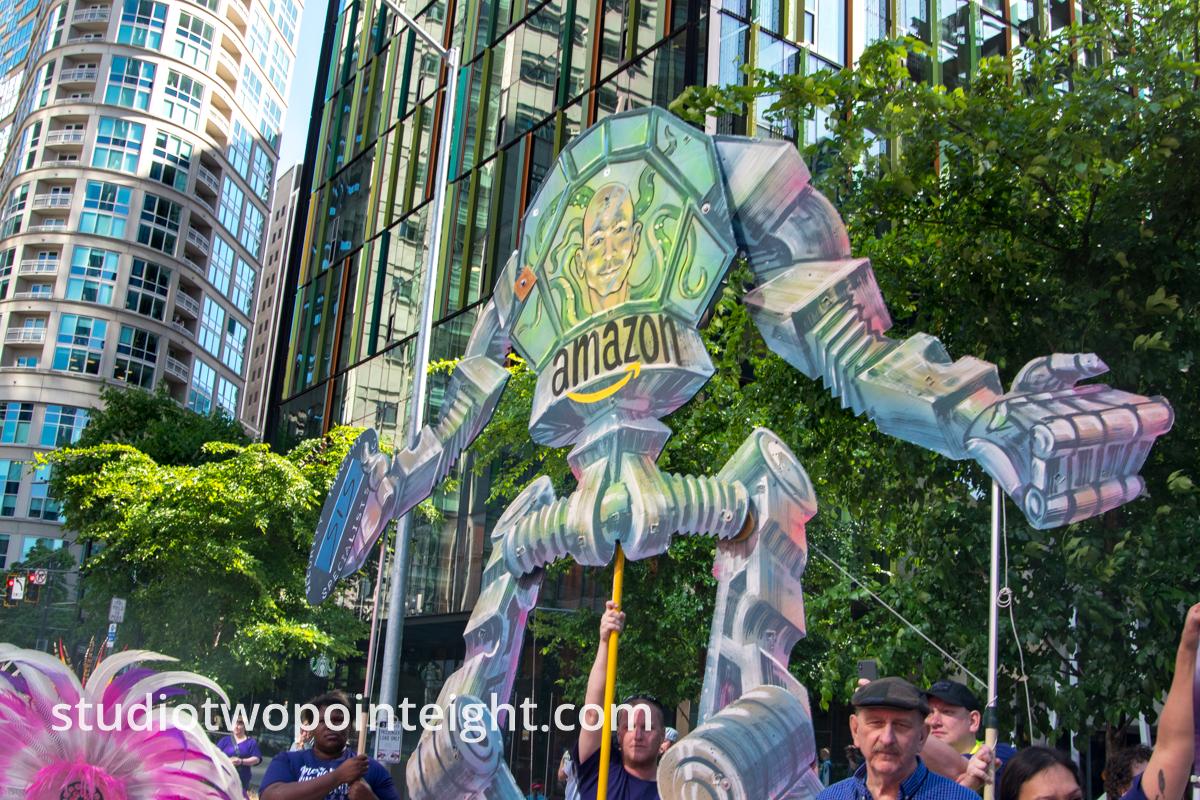 In these photographs from the May 1, 2019 Immigration policy and Worker's Rights March and Rally held in Seattle, Washington, protesters against the working conditions of some amazon.com contract employees erected and displayed a large effigy of amazon.com CEO and founder Jeff Bezos in front of amazon.com headquarters. 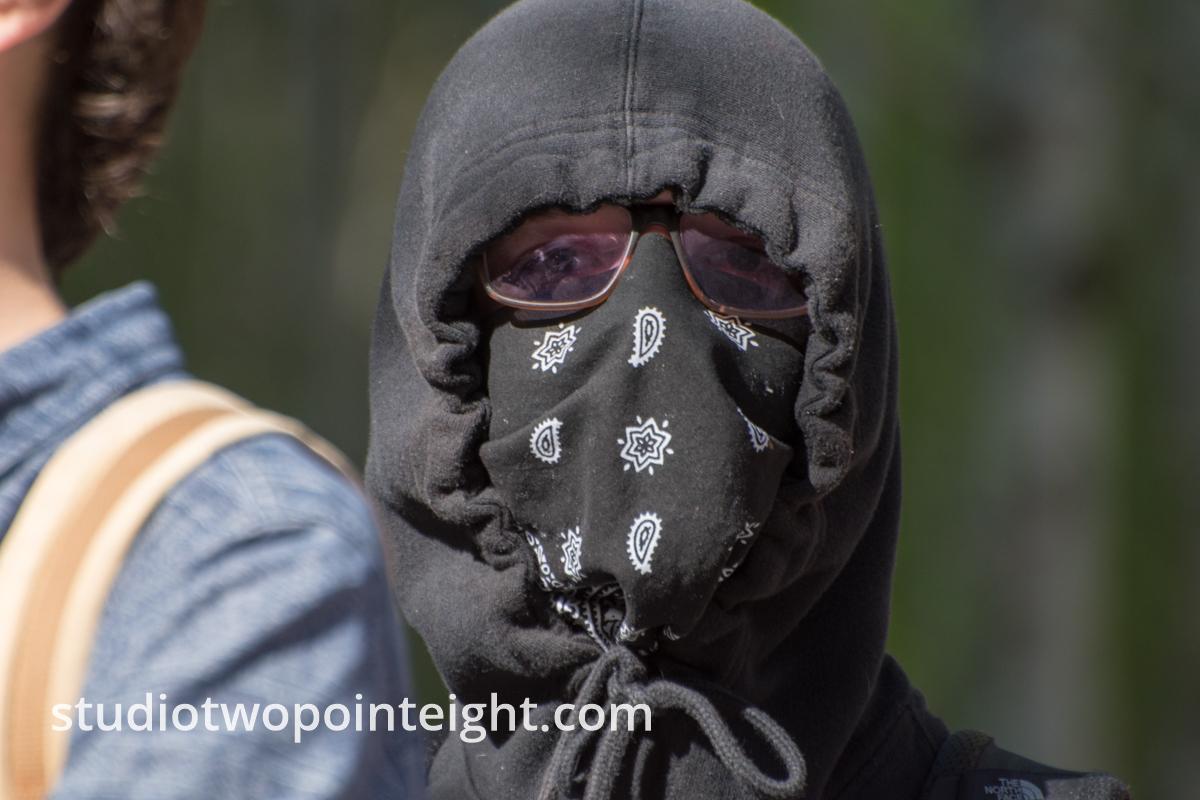 In this gallery of wide aspect ratio photographs taken on May 1, 2019 during the Immigration Politics Rally in Seattle, a tiny contingent of Marxist Communist Antifa Black Bloc domestic terrorists were present infiltrating the immigration and worker rights politics event. 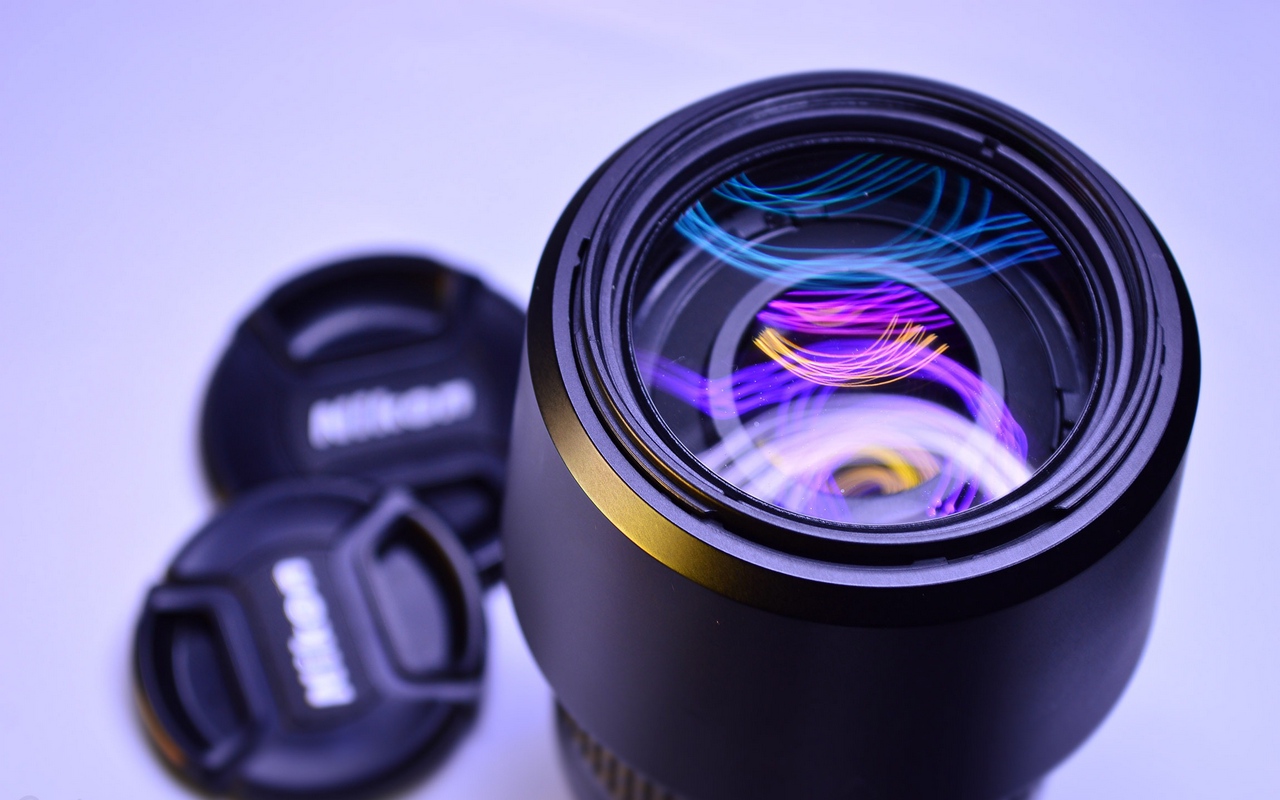