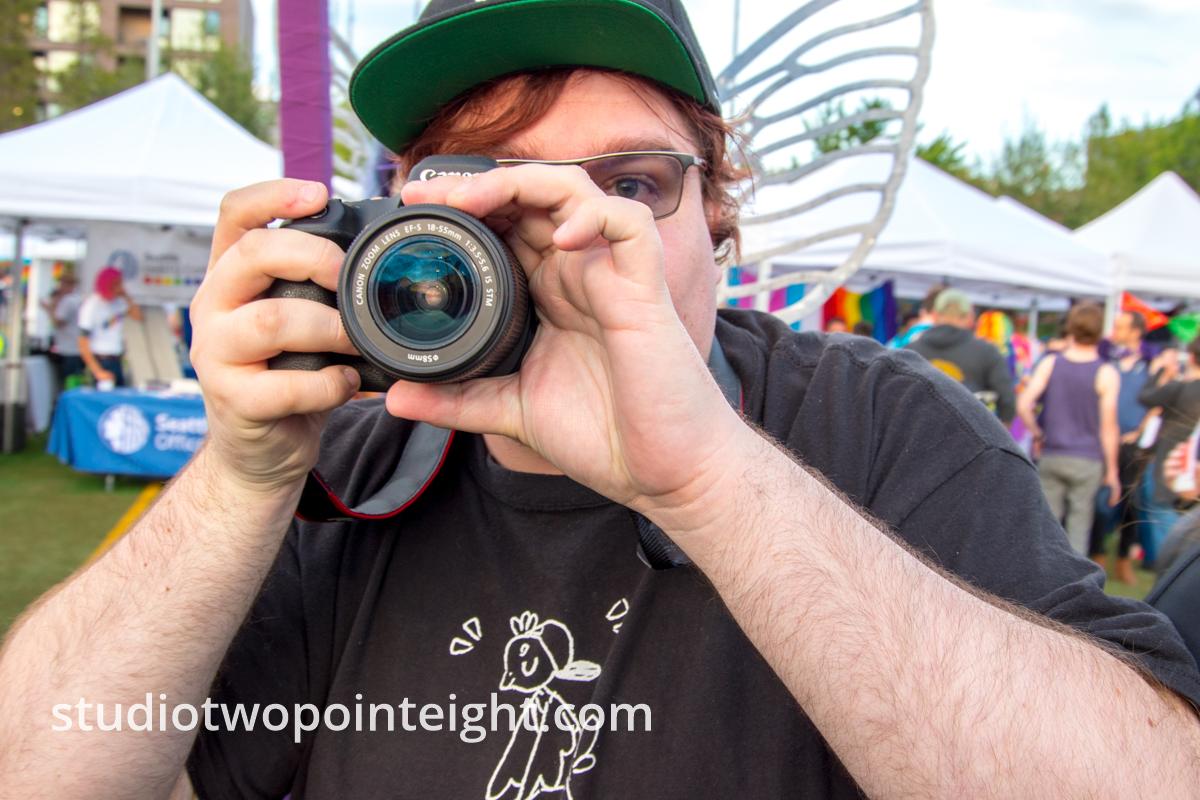 This Studio 2.8 photograph was produced on the evening of June 28, 2019 at the Seattle Trans Pride event, held at Cal Anderson Park in the Capitol Hill neighborhood of Seattle, Washington. The organizers of the Seattle Trans Pride 2019 march and rally, an organization called "Gender Justice League", whose executive director is Elayne Wylie, described their event on their website with the following statement:

Instead, a vigilante hate mob attacked, menaced, assaulted, and battered an LGBTQ woman of color professional photographer with hypocritically hateful, quite unlawful, and rather criminal, false accusations that the woman of color was a "racist", "fascist", "Nazi", "white supremacist", when in fact this photographer was one of the very people the event was supposedly meant to celebrate. The Seattle Trans Pride 2019 vigilante hate mob, dominated by European American, i.e. "white" males, intimidated and menaced a senior citizen LGBTQ woman of color professional photographer with hypocritical hate and bigotry that would and should shock the conscience of any reasonable American.

In this Studio 2.8 photograph, one of the participants in the vigilante hate mob, an apparent "white" man, crowded directly into the face of the Studio 2.8 woman of color photographer who, through years of experience and professionalism, was able to produce this photograph anyway, while being menaced, taunted, assaulted, by the "white" man in this photograph with malicious, hateful, tortiously libelous false accusations such as: "are you a racist?", hate taunts of "white supremacist", and worse.

The brief video clip below, from a helmet mounted GoPro brand video camera, provides a glimpse into the surreal nature of this bizarre scene, as dozens of hypocritical people who were supposed to be taking part in an even about "inclusion", crowded around a lone, senior citizen, LGBTQ, woman of color, professional photographer, taunted and menaced her with malicious hate, and then proceeded to physically assault and batter the LGBTQ woman of color photographer, while making hate filled, unwarranted and unreasonable, demands that the LGBTQ woman of color photographer leave the event, even while masked Anarcho-Communist domestic terrorists lurked among them in the crowd taunting, and were allowed by the event organizers, Gender Justice League, to stay at the event.

The surreal, real life, scene created by the criminal vigilante mob of bigoted hypocrites at the Seattle Trans Pride 2019 event was like a moment out of the 1931 version of the movie Frankenstein (see movie clip below), in which an angry lynch mob chased Frankenstein's monster through the streets of the village.

It is difficult to imagine a situation more bizarre and ironic than an event such as Seattle Trans Pride 2019, which was advertised as one about "inclusion", "acceptance", and "love", which was instead one at which a group of completely uncivilized and unhinged maniacally hateful hypocrites, who were presumably people who profess to believe in such values as "inclusion", "acceptance", and "love", but who instead demonstrated and expressed misguided, extreme, hatred, violent, unfounded bigotry, and even felonious malicious harassment, toward an LGBTQ woman of color who had attended the Seattle Trans Pride 2019 event for the sole professional purpose of creating a positive and supportive photographic documentary about it.